Dennis Michael Lynch
Home Reports DML: How to crush the Left in 2020 Written by DML
The Democrats who are running for president are either dumb, liars, race baiters or extreme radicals.

The problem: They all have big money and big media behind them.

Media: ABC, NBC, CBS, CNN & MSNBC reach about 35 million viewers each night.  These networks dedicate many news programs to being anti-Trump and pro-Liberal.  That leaves only Fox News.

The Fox News Channel brings in just about 3 million viewers each night and in my opinion is unreliable.  They have a terrible habit of going “left” when reporting the news and suspending loud voices who tell the truth.  See Shepard Smith / Judge Jeanine.

Online it gets worse.  Facebook is accused time and again of restricting conservative news from your feed, Twitter is accused of shadow banning conservatives, YouTube shuts down channels without reason or notice, and Google suppresses search results to silence the right.  Meanwhile, CNN.com and NYTimes.com dominate the digital news space with a combined 1,000,000,000 (1 billion) page views most months.

Millennial News.  Unfortunately, young adults tend to vote left.  How can we blame them, just look at the radical curriculums offered at most colleges and universities.

Then take a look at newcomer Axios.com and how they reach millennials with news and reports that tend to support liberalism.

It’s no coincidence that Axios raised $30 million from investors like NBC just in time for 2020.  They’ve also aligned themselves with the liberal propaganda pushers over at HBO; Axios now has a weekly news program.  HBO describes it like this: “Known for delivering news, coverage, and insight with a distinctive brand of smart brevity, Axios on HBO helps viewers better understand the big trends reshaping America and the world through exclusive interviews, profiles, and breaking news content”

Axios, which was launched by 3 of the top folks from Politico (another liberal news outlet), targets millennials with headlines that are often anti-Trump.

Here is a small sampling of a message they inserted into the Axios newsletter I received today, April 11.

The “Be Smart” section is a “tell all”.  You can see the brainwashing unfold with every word.

Notice that nowhere does it say a thing about the “booming Trump economy” or “historic low unemployment,” or “GDP growth and wage growth,”  or “ISIS is destroyed and Israel is safer.”

So how do we fight back?  I understand politics and the news media because I’ve lived both worlds from inside the back rooms.

In 2016, the left demonized Trump and blasted the narrative about how he couldn’t win.  The media did this to discourage voters from showing up on Election Day.  I fought back against these outlets by going LIVE on social media to explain how they operate.  I often rightly predicted the negative actions they’d take long before they happened.  You shared that information each day and this helped create a win for Trump.

To win, we need more than Fox News.

In 2016, FNC put the same people on air every day, most of them scripted by young producers who are often liberal.  We are now in 2020 and nothing has changed.  It’s the same people!  Problem is voters want information to be unscripted and authentic.  That’s why the Walk & Talk is so popular.

Between broadcasting the Walk & Talk videos on Facebook, YouTube and Twitter, in 2016 we racked up more than 100,000,000 (100 million) plays in just a few months before the election. With the help of our viewers sharing each video, we reached just as many people as the average Fox News program does in two months.

Fearing backlash from the social media Gods, following the election we launched the DMLNewsAPP so that people could circumvent Facebook, YouTube and Twitter to be with us directly.  It’s available for FREE on Google Play (Android) and Apple App Store (iPhone). I also launched TeamDML.com for those people truly serious about fighting for America with me on a daily, all day basis.  You need to get these tools for 2020!

The videos and podcasts we produce each day give people the power of unbiased information.  The goal is to make you the smartest person in the room when talking politics and news.  For example, in a recent Walk & Talk I explained how Bernie Sanders is a multi-millionaire with three homes including one on the water in North Hero, VT.  He bought the home for $575,000 right after losing the 2016 election.  Most millennials don’t know this because the media presents Bernie as a hero for the poor.

As my Walk & Talk pointed out, Bernie is far from being poor — he can’t relate — Bernie is swimming in the riches.  How do we tell people this is the case? Share the Walk & Talks!  The more millennials know this to be true, the more likely they reject his propaganda.

You. Me. And 2020. Facebook has launched a fan support program which they refer to as a subscription service.  They offered a limited amount of pages — mine being one of them — the ability to sell subscriptions to loyal fans.  Here’s what it looks like on mobile: Facebook offered me the option to choose what I wanted to charge for the subscription service.  I took the cheapest plan at 99 cents per month because for me it’s not about the money, rather, it’s all about the reach.  Facebook will deliver my content to paying subscribers — my biggest hurdle is over!

As a news company, we never share fake news, we never get involved in conspiracy theories.  Even so, without the new Facebook program in place, our content is restricted.  But now with the subscription service our content flows without interruption.

April 2019. We have to start now! We have 20 months to prepare for the Democrats who will spend more money than they have in the past to rid of Trump and shape America into a far-left country.   I ask you to invest 99 cents per month into your future.  If you stick with me only until the election, that’s less than $20 to get information that is honest and worthy of repeating / sharing.

To sign up, go to Facebook.com/DMLNewsAPP and click on the Become a Supporter button.  Once you sign on you will get all my Walk & Talk programs and additional reports sent to your news feed each day from now until the election.   I promise to give you the information you need to flip the millennials — and whoever else is considering voting for a Democrat — away from the likes of Bernie and Beto.

I received a thank you email not long after the election.  And I got the another one a year into the presidency from the Trump Org (see below).  I hope to get another email like it in 2020.  Please don’t wait to sign up!  GO HERE NOW. 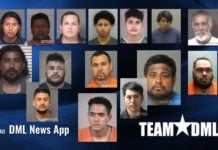