Wednesday’s newest video shows correspondent David Wright, who has since been suspended from ABC News, talking about how “voters are poorly informed” in part because of the network’s purported refusal to cover Trump appropriately. He alleges that the network carefully crafts its reporting to fit a certain narrative, particularly around Trump.

“I feel terrible about it,” Wright can be seen saying in the video. “I feel that the truth suffers, the voters are poorly informed and people also have the opportunity to tune into whatever they want to hear. And so, it’s like there’s no upside in – our bosses don’t see any upside – in doing the job that we’re supposed to do, which is to speak truth to power and hold people to account.”

WATCH the video below, which Project Veritas just released Wednesday morning. Tuesday evening, after ABC News learned the video was about to be released, they reportedly suspended Wright from his role at the network.

Project Veritas founder James O’Keefe tweeted on Wednesday, “EXCLUSIVE: @ABC News SUSPENDS Political Correspondent David Wright(@WrightUps) after he is caught by @Project_Veritas on undercover video identifying himself as a ‘Socialist’ and admitting the network spikes news important to voters.#ExposeABC.”

EXCLUSIVE: @ABC News SUSPENDS Political Correspondent David Wright(@WrightUps) after he is caught by @Project_Veritas on undercover video identifying himself as a ‘Socialist’ and admitting the network spikes news important to voters.#ExposeABC

Below is a shorter clip from the newly-released video, in which ABC correspondent David Wright says “I’d consider myself a socialist.”

NEW From @Project_Veritas:
ABC correspondent David Wright says “I’d consider myself a socialist”, admits to spiking stories, calls voters “poorly informed” and says the network doesn’t “give Trump credit for what things he does do”#ExposeABC

This is fucking infuriating. ABC News suspended David Wright for telling an undercover right-wing operative that he considers himself a socialist and a wealth gap exists. https://t.co/sxARTWf7j9

Wright did not respond to Fox News’ request for comment. A rep for ABC News told Fox News he would be reassigned after serving his suspension.#ExposeABC https://t.co/GG7aSos1vA 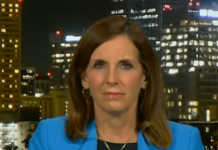