Dennis Michael Lynch
Home App Video of the Day DML EXCLUSIVE: Why Biden’s words could be a real danger to America... While campaigning in Florida on Tuesday, Biden confused Iran with Iraq, slipped up and used the term “Harris-Biden administration,” and tried to appeal to Hispanic voters by playing a portion of the 2017 hit song “Despacito.”

“We have to be more concerned than just about socialism, high taxes, open borders and universal health care, if Joe Biden becomes the president. We have to worry about more than a nuclear Iran, a paid-for Putin and police being eradicated with a Biden presidency,” DML warned.

“We are talking about a man who, with the mistake of his words, could literally throw this country into a financial abyss. Presidents move markets. Biden can say the wrong thing, and the market will react.  You’re talking about millions, billions, possibly trillions of dollars lost on this guy’s inability to get a thought through,” he added.

“This guy is a danger to all Americans. He is not healthy. His brain needs a mask,” DML declared.

WATCH his full commentary in the brief video clip below. (This is only a portion of the entire broadcast. Scroll down for details on how to join the growing TeamDML.com movement and get access to exclusive, daily news broadcasts and much more!) 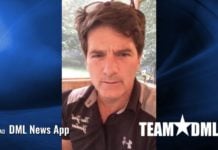 EXCLUSIVE: Why America may be headed toward becoming third-world country [VIDEO]