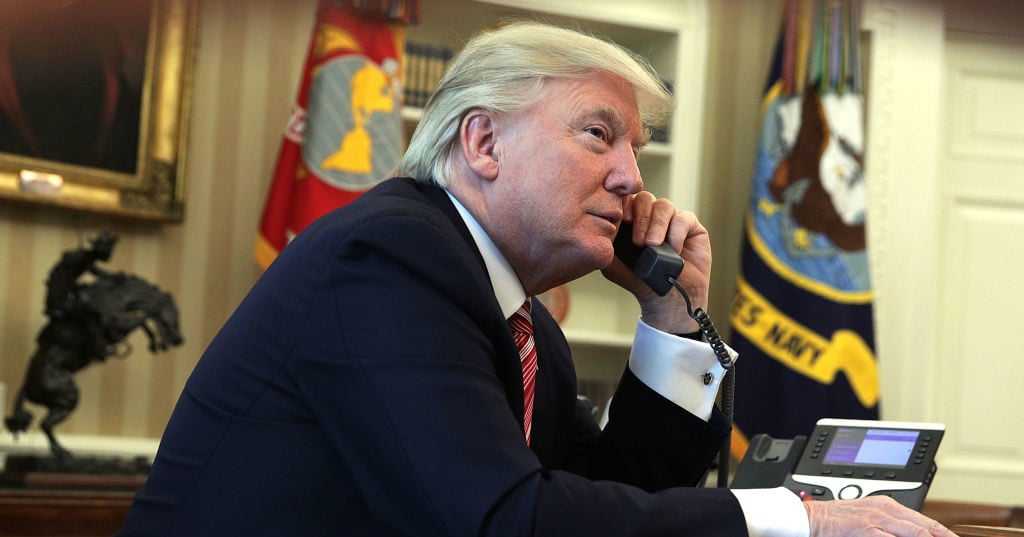 Today is January 4 and I am Dennis Michael Lynch. Below are my opinions on the stories grabbing headlines this morning. I hope you share this briefing as doing so will make you the smartest person in the room, in my opinion. And don’t forget to download the free DML App from the Google Play or Apple App Store to remain connected to me throughout the day.

1 – Georgia Secretary of State records and leaks audio of phone call from President Trump, asking him to find 11,780 votes
Breitbart reports: President Donald Trump pressured Georgia Secretary of State Brad Raffensperger (R) on Saturday to recalculate the state’s votes from the 2020 presidential election, according to audio of a phone call obtained by the Washington Post.

“I just want to find 11,780 votes which is one more than we have because we won the state,” Trump said.

The president spoke to Raffensperger and his attorney, Ryan Germany, presenting him with data showing he actually won the state of Georgia. White House chief of staff Mark Meadows and conservative lawyer Cleta Mitchell were also on the line with Trump according to the Post.

“We have won this election in Georgia based on all of this and there’s nothing wrong with saying that Brad,” Trump told him, claiming the final vote count was off by hundreds of thousands of ballots.

I spoke to Secretary of State Brad Raffensperger yesterday about Fulton County and voter fraud in Georgia. He was unwilling, or unable, to answer questions such as the “ballots under table” scam, ballot destruction, out of state “voters”, dead voters, and more. He has no clue!

“Georgia election data, just revealed, shows that over 17,000 votes illegally flipped from Trump to Biden.” @OANN This alone (there are many other irregularities) is enough to easily “swing Georgia to Trump”. #StopTheSteal @HawleyMO @SenTedCruz @Jim_Jordan

Also during the hearing, digital ID systems inventor Jovan Pulitzer announced that his team had just hacked into a Fulton County voting machine that was currently being used in the Georgia runoff, proving the machines were connected to the internet.

Breaking GA: @JovanHPulitzer just announced that as we speak machines have been compromised in GA – they are connected to the internet and shouldn’t be. pic.twitter.com/kMgB3voEwW

2 – President Trump to Address ‘Stop the Steal’ Protesters on White House Lawn on January 6
Breitbart reports: President Donald Trump and a list of other high-profile speakers will address “Stop the Steal” protesters on Wednesday, Jan. 6, ahead of an effort by some congressional Republicans to challenge the certification of President-elect Joe Biden’s electoral college victory.

Thousands of Trump supporters are expected to gather in Washington, DC, for the occasion, and members of Trump’s team have been brought in to help organize the event which is officially being hosted by Women for America First.

The main event will happen on the Ellipsis at the White House—informally called “the President’s Lawn”—a source familiar with the organizational efforts said. The president tweeted Sunday morning that he will be there on Wednesday.

The president is expected to deliver remarks beginning at around 11 a.m. He will cap off an event at which several other high-profile names, including his eldest son Donald Trump, Jr., Rudy Giuliani, Texas Attorney General Ken Paxton, Georgia State Rep. Vernon Jones, Roger Stone, Bernie Kerik, and many more.

I will be there. Historic day! https://t.co/k6LStsWpfy

DML: It’s like the last battle in the fight for the soul of America.

“I think it’s right that we have the debate. I mean, you see now that senators are going to object, the House is going to object — how else do we have a way to change the election problems?” McCarthy told The Hill on Sunday.

The NY Post reported: At least 140 Republicans in Congress are expected to object to the results of the Electoral College on Wednesday, Jan. 6.

A member of both the House and Senate must object to trigger actual floor votes on whether to accept the outcome. But once the objections are made, the House and Senate hold separate votes. Both chambers must accept an objection. Because Democrats will control the House, it’s unlikely that the effort will prevail in the lower chamber.

DML: I’ll be talking about this on my podcast today.

4 – GOP senators, led by Cruz, to object to Electoral College certification, demand emergency audit
Fox News reports: A coalition of GOP senators and senators-elect, led by Sen. Ted Cruz, will object to the Jan. 6 certification of the presidential election results when a joint session of Congress meets next week unless there is an emergency 10-day audit of the results by an electoral commission.

Cruz was the one who orchestrated the effort, working with other senators to organize the push against the certification and call for the electoral commission with just days to go before the joint session of Congress.

Sen. Josh Hawley, in a separate statement, said he will object to the electoral college votes.

Democrat Rep. Eric Swalwell, who has recently been the center of controversy after reports surfaced of his prior relationship with a Chinese spy, called for the Republican senators to be “named and shamed” and called them the “enemies of democracy:

DML: I was calling for an audit weeks ago!

5 – Sen. Tom Cotton breaks with conservative colleagues who will oppose electoral vote count
The Hill reports:  Sen. Tom Cotton (R-Ark.), a possible contender for the GOP presidential nomination in 2024, broke with his rivals Sunday night by announcing he will not object to the counting of electoral votes on Jan. 6.

While Cotton said he is concerned about how the 2020 presidential election was carried out, such as changes to election law allowing mail-in ballots arriving after Election Day to be counted, he argued it is up to the states and the courts — not Congress — to handle election laws.

Please see my statement below on the Joint Session of Congress on January 6:https://t.co/oozjpm9r9x

6 – Prayer To Open The 117th Congress Ended With ‘Amen And Awoman’
The Daily Caller reports: Democratic Missouri Rep. Emanuel Cleaver ended his prayer to open up the 117th Congress on Sunday with the words “amen and awoman.”

Video of the prayer’s ending was posted to Twitter by Republican Pennsylvania Rep. Guy Reschenthaler, who pointed out that the word “amen” is Latin for “so be it.”

“We ask it in the name of the monotheistic God, [unintelligible], and God known by many names and by many different faiths, amen, and awoman,” said Cleaver, an ordained United Methodist pastor.

Ironically, this just happened after House Speaker Nancy Pelosi unveiled the rules for the 117th Congress on Friday, which contain “future-focused” proposals, including the elimination of gendered terms, such as “father, mother, son, and daughter.”

The prayer to open the 117th Congress ended with “amen and a-women.”

It’s not a gendered word.

I was honored to deliver the opening prayer for the 117th Congress. May God bless each and every Representative with the courage and wisdom to defend our democracy and the liberties we all hold so dearly. https://t.co/z3vkWOk7lc

DML: Unbelievable – I’ll have plenty to say about this in my podcast today!