The media is finally acknowledging the massive numbers of illegal immigrants pouring across border into the U.S. – 144,278 in the month of May alone, and another 109,474 for the month of April. Total for this fiscal year now stands at over 680,000 – and thousands more continue coming DAILY.

However…. one immigration expert has continued to talk about what this is COSTING American citizens – facts that the media and open-border Democrats continue to ignore.

Over the past decade, Dennis Michael Lynch has produced three powerful documentary films about the costs and the impact of illegal immigration. In his films, DML takes you behind the scenes and provides facts, interviews and real solutions that are never presented by the mainstream media. It is critically important that the eye-opening information in these films be shared, now, more than ever. 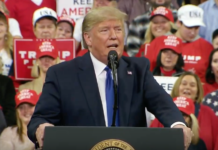