Only 2 days left for this special promo!

We have a BIG ANNOUNCEMENT today!  DMLNewsApp founder Dennis Michael Lynch has announced that effective (today) Thursday, July 25 – Sunday, July 28, he will bundle two of his most popular documentaries into one order.  Every “They Come To America” Trilogy order (which is actually 3 films in one set) will also include a FREE copy of DML’s new film, “United States of Tents,” which provides eye-opening information on the homeless crisis in the U.S. Read on for more details….

Over the past decade, DML has produced three powerful documentary films about the costs and the impact of illegal immigration. Every person who has watched DML’s documentaries say these films opened their eyes to the TRUTH about the border in a way they’ve never seen before. These three films are timeless, and a MUST-SEE for anyone concerned about protecting the sovereignty of the United States.

Now they are all packaged into one complete DVD set, for just $25.

To order online now, just click the yellow BUY NOW button below. You do not need a PAYPAL account to order. Just sign in as a guest. *If you have questions about your order, contact us at [email protected]   Again, effective July 25 – July 28, this offer includes:

PLEASE WATCH the video clip below, as DML gives an exclusive behind-the-scenes summary of “United States of Tents.” Additionally, the video includes scenes from the first 10 minutes of this powerful, moving documentary. 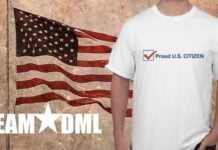