At least one person is dead and several are wounded after a shooting broke out at a gathering of over 100 people from motorcycle clubs in Waterloo, Iowa, on Saturday.

Police in Waterloo said they responded to a “shots fired report” at about 3:17 a.m Saturday morning at a site where the bikers were gathered.

Waterloo Police Chief Joel Fitzgerald said at a press conference Saturday that police found close to a dozen people who had been injured or shot in what appeared to be “some kind of confrontation” at the location that escalated into a shooting. 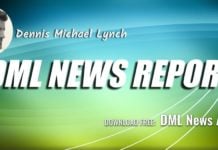