President Trump has promised to announce his nominee to fill the vacant Supreme Court on Saturday at 5pm, but word has already leaked out Friday evening on who he has chosen.

Multiple sources have reportedly told the media that the president has chosen Judge Amy Coney Barrett, 48, a former clerk for the late Justice Antonin Scalia, to fill the seat vacated by the death of Justice Ruth Bader Ginsburg.

Barrett has long been considered a front-runner for the seat after she was closely examined to potentially replace former Justice Anthony Kennedy’s on the high court. Though Trump eventually selected Justice Brett Kavanaugh for the slot, news outlets reported at the time that Trump at the time said he was “saving her for Ginsburg.”

The appeals court judge is a former Notre Dame professor and a devout Catholic, a fact that was controversial at her 2017 confirmation hearing to her current seat on the 7th Circuit. “The dogma lives loudly within you, and that’s of concern,” Senate Judiciary Committee Ranking Member Dianne Feinstein, D-Calif., told Barrett. She was eventually confirmed 55-43.

Barrett is expected to start meeting with Republicans senators on Tuesday. Senate Majority Leader Mitch McConnell has said he has enough votes to confirm Trump’s nominee.

PLEASE TAKE OUR POLL BELOW – WE WANT YOUR OPINION.  Do you approve of Amy Barrett as President Trump’s pick to replace Ginsburg? 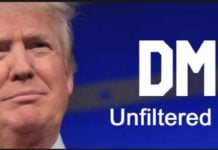