PORTLAND, Oregon—Police say a Proud Boys rally and counter-protests in Portland, Oregon, have largely dispersed without serious violence Saturday, though they are investigating an assault after one person who was documenting the event was pushed to the ground and kicked in the face.

Separately, police said a criminal citation was issued after officials confiscated firearms, paintball guns, baseball bats and shields from a pick-up truck belonging to right-wing protesters that was initially stopped for having obscured license plates as it left the rally.

Several hundred people gathered at the Proud Boys rally to support President Donald Trump and to condemn the violence that has been occurring for more than three months during “Black Lives Matter” and “Antifa” protests on Saturday afternoon. The attendance was far fewer than the 10,000 organizers had expected. 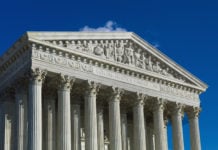