Pro-life groups wasted no time Wednesday in condemning the Biden-Harris tandem, denouncing it as “the most pro-abortion ticket in history,” as advocates on both sides of the issue girded for a hard-fought 2020 battle.

The Women Speak Out PAC, the campaign arm of the Susan B. Anthony List, marked the Tuesday selection of California Sen. Kamala D. Harris as the presumptive Democratic vice presidential nominee by releasing an ad in seven battleground states blasting the candidates as “pro-abortion fanatics.”

“Kamala Harris joins Joe Biden on the most pro-abortion ticket in history,” said the political action committee in a statement. “Their agenda: a pro-abortion Supreme Court, abortion-on-demand up to birth, paid for by American taxpayers, and no protections for infants born alive after failed abortions.”

The information listed is from WASHINGTONTIMES.COM.

DML: I have to agree with this analysis.  It’s amazingly sad to think that both of these liberal radicals will champion for Black Lives Matter, but only if the black life is that of a criminal like George Floyd or Michael Brown.  If it’s a black baby, or a baby of any kind, ready to make its splash into the world, Joe and Kamala are totally cool with allowing it to be murdered in the mother’s womb.  How sick are these people! 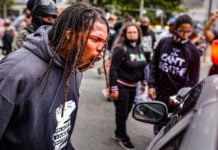