Dominion Voting Systems committed to attending an oversight hearing in Pennsylvania but backed out at the last moment, lawmakers in the Keystone State said Friday.

“The members of the state government committee were looking forward to publicly addressing the plethora of accusations of Dominion Voting Systems in a format which would have allowed open and honest dialogue. I was impressed at what appeared to be the willingness of Dominion Voting Systems to address accusations, and it would have put the 1.3 million Pennsylvanians who used their machines at ease, including myself,” state Rep. Seth Grove, a Republican who chairs the Government Oversight Committee, said during a press conference.

“Unfortunately, last evening, Dominion Voting Systems lawyered up and backed out of their commitment.”

The report notes that Pennsylvania counties face a Nov. 23 deadline to certify the results of the election.

Dominion reportedly notified Pennsylvania lawmakers at 10pm on the night before the next morning’s hearing that they were backing out. After Dominion executives bailed out of the scheduled hearing, Pennsylvania Republican lawmakers held the press conference to call them out.

UPDATE: At 10 pm last night we were informed that Dominion Voter Systems backed out of testifying before the House State Govt Comm. There will be a House press conf at 10 am TODAY to address Dominion’s failure to appear.

“Dominion Voting Systems could have put all of Pennsylvania’s voters questions about their role in our elections at ease had they shown up here today. They chose to cancel and we’re still left with these questions,” Rep. Seth Grove said.

“Why would a vendor of public goods fear discussing their products sold to the public for the public good? If Dominion’s products were successful and operated as they were supposed to, why wouldn’t Dominion take the opportunity to publicly review its success? How hard is it to say, ‘our ballot machines worked exactly as promised, and they are 100 percent accurate’? Why, after weeks of accusations has Dominion Voting Systems not released any analysis of the success of their voting machines to the public in order to stop their accusers in their tracks?” Grove asked.

“If they have nothing to hide, why are they hiding from us?” he demanded. He said by the company’s failure to attend the hearing, they have only “lent credibility” to the accusations against them.

Rep. Dawn Keefer said 14 counties utilize the Dominion Voting Systems software. “We trust the workers in our polling places and in our counties. They’re are neighbors and people we elected. But what we don’t know is the role of 3rd party companies. And when they rescind their participation in our hearing, we’re left wondering why.”

Grove: Dominion Voting Systems could have put all of Pennsylvania’s voters questions about their role in our elections at ease had they shown up here today. They chose to cancel and we’re still left with these questions.

Rep. Dawn Keefer: 14 counties used the Dominion Voting Systems software. We trust the workers in our polling places and in our counties. But what we don’t know is the role of 3rd party companies. And when they rescind their participation in our hearing, we’re left wondering why

Video of today’s #PAHouse State Govt Cmte press conference after Dominion Voting Systems abruptly canceled its appearance at a hearing planned for this AM.

It has been revealed that Penelope Chester Starr, a communications manager for Dominion Voting Systems, previously worked for the Clinton Foundation. In a statement last week, Dominion denied that their software switched any votes. They did admit in their statement, “Dominion made a one-time philanthropic commitment at a Clinton Global Initiative meeting in 2014, but the Clinton Foundation has no stake or involvement in Dominion’s operations.” 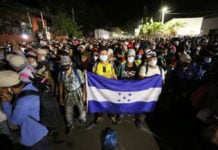