Rep. Thomas Massie scolded a witness who alleged that “nobody” has died because of lack of access to a gun during a hearing on voter identification laws.

During his questioning, Massie asked each of the witnesses if they agreed that identification requirements for purchasing a firearm infringe on the rights of minorities in the same way that requiring an identification to vote disenfranchises voters.

While two witnesses “dodged the question,” according to the Examiner,  Teaching for Change board member Timothy Jenkins noted the Second Amendment subject change.

“Let the record show that nobody has died because of their being deprived of their guns,” Jenkins said.

“Mr. Jenkins, that’s absolutely false,” Massie replied. “I can give you multiple examples.”

“I had a staffer, Nikki Goeser, who worked for me,” Massie said. “She watched her husband be gunned down in front of her in a gun-free zone because her firearm… She followed the law and left her firearm in the vehicle.

“So, do not tell me and do not tell her that nobody has ever died because they were deprived of their right to keep and bear arms,” Massie said.

Rep. Thomas Massie scolded a witness who alleged that “nobody” has died because of lack of access to a gun during a hearing on voter identification laws.https://t.co/CLIp39zQDp 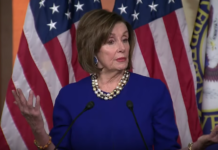