But on Oct. 16, five days after Gov. Gavin Newsom signed Assembly Bill 32 into law, U.S. Immigration and Customs Enforcement officials posted a solicitation — a request for offers — on the Federal Business Opportunities website for at least four detention facilities around the state.

Democratic state legislators and advocates for immigrants say that ICE’s action is a blatant attempt to circumvent the law in order to continue detaining immigrants in California. They’re now calling for answers from the agency, which has remained tight-lipped about the situation.

Sen. Kamala Harris (D-Cali.), who is running to capture the Democratic nomination for president in 2020, weighed in, according to the LA Times.

“Let’s be clear: By rushing through new contracts before California’s ban takes effect, ICE is violating the spirit of California law and risks wasting taxpayer dollars in an attempt to lock away even more human beings,” Harris reportedly said. “We need to fight back.”

ICE is rushing to build private detention centers in California before they are banned on Jan. 1st.

Californians passed a bill banning for-profit prisons because no one should profit off the detention of immigrants.https://t.co/SSjiDojWfS 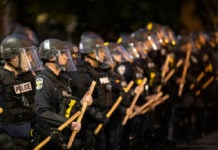