The retired Iowa farmer who confronted former Vice President Joe Biden over his son’s business activity in Ukraine was heckled while speaking with the media after the event.

The 83-year-old, identified by the New York Post as Marine Corps veteran Merle Gorman, was telling reporters a candidate, presumably Biden should “please drop out of the race and put your support…” before he was cut off by the heckler — according to video posted by the Washington Examiner.

“Why don’t you just get out of here?” the second man said, leaning to speak into Gorman’s ear as he sat in a chair across from reporters.

Gorman told the man, “Stick it up your a–, fella,” before the two men exchanged words.

In his comments to reporters, Gorman, who is a registered independent, said, “[Biden] is so old, he’s senile anyhow.”

“It was all softball stuff, he don’t want to answer the hard stuff,” the voter added. “He’s been in the Congress all of his life, and all of these problems like high drug prices and all of that — where in the hell has he been for the last 50 years?”

“Stick it up your ass, fella.”

Voter that challenged @JoeBiden gets into confrontation with another voter that told him to “get out of here.”

The Iowa voter who Joe Biden called a “damn liar” speaks with reporters after their tense exchange: “At least he’s not getting so old that he’s senile.” https://t.co/jUThLG82gh pic.twitter.com/UGSNrBt9ei 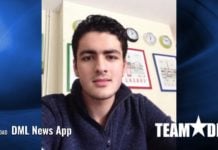