Former Vice President Joe Biden touted his gun control proposals on the seventh anniversary of the Sandy Hook shooting, saying he will prioritize efforts to combat the rise in shootings should he win the presidency.

“I said when I got into this race that I’m running to restore the soul of America,” he said in a statement. “Few things make the need for that more clear than school shootings – what kind of nation are we if we simply accept that kids learn active shooter drills with their ABCs?

“I know that we can defeat the NRA,” he continued. “I’m the only candidate in the race who has done it before – twice, when I was in the Senate. As president I’ll do it again.”

One Twitter user responded by posting an old video of Biden from 2013, telling someone they should buy a double-barrel shotgun to protect themselves.

Biden says he and his wife live in a secluded, wooded area, and said he has told his wife if there is ever a problem, “just walk out on the balcony and fire two blasts.”

Tell me Joe, what is it that you are attempting to defeat? Obviously, you have no idea what the NRA does, the people it educates, the people it represents. Oh, yes, I know your answer is “Buy a Shotgun….”. Your ignorance is obvious. pic.twitter.com/I8gQUPTlf1

Seven years after Newtown, we have to ask ourselves: what kind of nation are we if we simply accept that kids learn active shooter drills with their ABCs?

We can defeat the NRA. And we’ll use every tool of our democracy to do it. https://t.co/gBcT7VRXtR 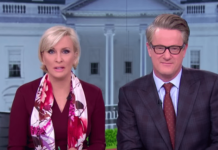