President Trump on Wednesday criticized the Kurds, saying they didn’t help the United States during World War II and that they were only fighting for their land in Syria during the battle against ISIS.

“The Kurds are fighting for their land,” Trump told reporters at the White House during an event in the Roosevelt Room.

While Trump did not specify which article he was referring to, The Hill notes that a TownHall article by conservative Kurt Schlichter “included a reference to the Kurds and Normandy.”

Watch Trump’s comments on Syria in the video below. Watch the full press conference HERE. 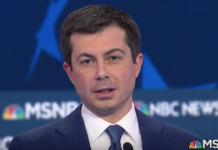