President Trump said he would “consider” appointing a “special prosecutor” to investigate the Trump-Russia investigators, expressing frustration with U.S. Attorney John Durham, who was picked by Attorney General William Barr last year to investigate the origins and conduct of the FBI’s Crossfire Hurricane investigation.

Trump made the comments during a lengthy interview with Maria Bartiromo on Sunday Morning Futures on Fox News, with the president shifting from his complaints about allegations of voter fraud — which his legal team has repeatedly lost in court — to what he saw as a lack of consequences for fired FBI Director James Comey, fired FBI Deputy Director Andrew McCabe, former CIA Director John Brennan, and others.

“Where is the DOJ and the FBI in all of this, Mr. President?” Bartiromo asked of Trump’s claims of voter fraud. “You have laid out some serious charges here. Shouldn’t this be something that the FBI is investigating? Are they? Is the DOJ investigating?”

“Missing in action. Missing in action. Can’t tell you where they are. I ask, ‘Are they looking at it?’ Everyone says, ‘Yes, they’re looking at it.’ Look, where are they with Comey, McCabe, and all these other people? You know, I said I’ll stay out of it. I wish I didn’t make that statement. There’s no reason, really, why I have to,” Trump replied. “But where are they with Comey, with McCabe, with Brennan, with all these people. They lied to Congress. They lied, they leaked, they spied on our campaign. I see Carter Page is bringing a lawsuit, that’s good news. Where are they with all of this stuff? And, you know, what happened to Durham? Where’s Durham?”

John Durham, the U.S. attorney for Connecticut, is still investigating how the FBI and other government agencies gathered intelligence on then-candidate Donald Trump’s 2016 election campaign.

“Before we leave the subject of Durham, I feel like something happened in September. I don’t know what happened, but we were all expecting Durham to come out and A.G. Barr to be aggressive,” Bartiromo said. “Will you appoint a special counsel to investigate and to continue the investigating into what took place in the 2016 election? You mentioned Jim Comey and Andrew McCabe not facing accountability — will you appoint a special counsel?”

Trump went on to slam the Mueller investigation, expressing disdain with the efforts to take down Michael Flynn, whom the President proudly pardoned Wednesday.

“By the way, Comey, McCabe — that’s the least of it. You talk about the Logan Act, they used the Logan Act on General Flynn, who I was very proud to pardon. But they wanted to use and they did use the Logan Act on General Flynn, and you know where that started. Look, this whole thing is a terrible situation. This should’ve never been allowed to happen,” Trump continued. “And yeah, I would consider a special prosecutor. Because you know this is not a ‘counsel’ — it sounds so nice. I went through three years of a special counsel prosecutor — I call it ‘prosecutor’ because it’s a much more accurate term. They spent $48 million, Weissmann and all Trump haters, they spent $48 million. That was the Mueller investigation. They went through taxes, they went through everything — for $48 million you look at everything, and they found no collusion, no nothing.”

“What happened to Durham? Where’s Durham?”@realDonaldTrump says he would “consider” appointing a special prosecutor to investigate the Russia probe investigators.
https://t.co/ckXezgso6c 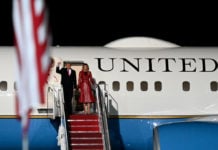