“He has got a certain talent for this,” Trump said of Pence during a press briefing Wednesday.

“I’m bringing together all the members of the coronavirus tasks force that you have established … My role will be to bring that team together,” Pence told the president.

“Mike will be working with the professionals, doctors and everybody else that is working. The team is brilliant. I spent a lot of time with the team the last couple weeks,” the President said. “But they are brilliant and we’re doing really well and Mike is going to be in charge and Mike will report back to me. But he has a certain talent for this.”

Health and Human Services Secretary Alex Azar, who appeared with Trump at the press conference, said he was still the head of the administration’s coronavirus task force, adding that he “couldn’t be more delighted” in Pence’s appointment to lead the overall government response.

The White House has denied it had been considering appointing a czar to oversee the administration’s response outbreak.
“According to administration sources, Trump has been displeased with Health and Human Services Secretary Alex Azar — for failing to keep him updated on crucial decisions concerning the virus,” CNN reported.
WATCH: 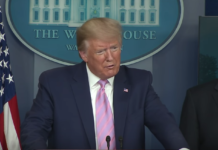