The Justice Department is seeking the breakup of Google’s business brokering digital advertising across much of the internet, a major expansion of the legal challenges the company faces to its business in the U.S. and abroad.

A lawsuit filed Tuesday, the Justice Department’s second against the Alphabet Inc. unit, following one filed in 2020, alleges that Google abuses its role as one of the largest brokers, suppliers and online auctioneers of ads placed on websites and mobile applications. The filing promises a protracted antitrust battle with wide-ranging implications for the digital-advertising industry.

Filed in federal court in Virginia, the case alleges that Google abuses monopoly power in the ad-tech industry, hurting web publishers and advertisers that try to use competing products.

In a press release on Tuesday, the Justice Department announced:

Today, the Justice Department, along with the Attorneys General of California, Colorado, Connecticut, New Jersey, New York, Rhode Island, Tennessee, and Virginia, filed a civil antitrust suit against Google for monopolizing multiple digital advertising technology products in violation of Sections 1 and 2 of the Sherman Act.

Filed in the U.S. District Court for the Eastern District of Virginia, the complaint alleges that Google monopolizes key digital advertising technologies, collectively referred to as the “ad tech stack,” that website publishers depend on to sell ads and that advertisers rely on to buy ads and reach potential customers. Website publishers use ad tech tools to generate advertising revenue that supports the creation and maintenance of a vibrant open web, providing the public with unprecedented access to ideas, artistic expression, information, goods, and services. Through this monopolization lawsuit, the Justice Department and state Attorneys General seek to restore competition in these important markets and obtain equitable and monetary relief on behalf of the American public.

As alleged in the complaint, over the past 15 years, Google has engaged in a course of anticompetitive and exclusionary conduct that consisted of neutralizing or eliminating ad tech competitors through acquisitions; wielding its dominance across digital advertising markets to force more publishers and advertisers to use its products; and thwarting the ability to use competing products. In doing so, Google cemented its dominance in tools relied on by website publishers and online advertisers, as well as the digital advertising exchange that runs ad auctions.

The DOJ also noted in their press release

“As a result of its illegal monopoly, and by its own estimates, Google pockets on average more than 30% of the advertising dollars that flow through its digital advertising technology products; for some transactions and for certain publishers and advertisers, it takes far more. Google’s anticompetitive conduct has suppressed alternative technologies, hindering their adoption by publishers, advertisers, and rivals,” the Justice Department stated.

Attorney General Merrick Garland announced the lawsuit in a press briefing on Tuesday.

Garland started his announcement by addressing the mass shooting in Half Moon Bay, California, and declared that the Justice Department is committed to ending gun violence.

Garland then announced that the Department of Justice, joined by eight states, have filed a lawsuit against Google.

“Monopolies threaten the free and fair markets upon which our economy is based. They stifle innovation, they hurt producers and workers and they increase costs to consumers,” Garland said.

Below is a video of the entire press briefing:

“@TheJusticeDept is seeking the breakup of @Google’s business brokering digital advertising across much of the internet, a major expansion of the legal challenges the company faces to its business in the U.S. and abroad.” https://t.co/lCGS3K7e52 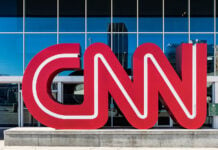