Less than a week after leaving the White House, former President Donald Trump has established an office in Florida.

Trump has been banned from all major social media accounts, preventing him from communicating directly with the American people in the way he has been accustomed to.

The following statement was just released to the press Monday afternoon:

Statement from the Office of the Former President

The Office will be responsible for managing President Trump’s correspondence, public statements, appearances, and official activities to advance the interests of the United States and to carry on the agenda of the Trump administration through advocacy, organizing and public activism.

President Trump will always and forever be a champion for the American People.

Bloomberg reporter Josh Wingrove was one of the many reporters who posted a copy of the press release on Twitter:

In an interview on Saturday, Richard Grenell, who served as an ambassador and acting director of national intelligence during the Trump administration, said that Trump “has told me personally, multiple times, that he does want to run again.”

Noting that there was a long way to go before that matter would be decided, Grenell said, “We’ll see if that holds.”

When questioned about his future plans by a Washington Examiner report on Friday, Trump simply said, “We’ll do something, but not just yet.” 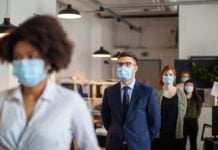