Today is July 29 and here are the stories I am watching.

1-Mass shooting in California leaves multiple people dead
At least one gunman opened fire Sunday at Northern California’s Gilroy Garlic Festival, killing at least three and injuring 15, before being fatally shot by police. Authgorities are searching for a possible second suspect. The gunman, whose name has not been released, was killed by police who were stationed nearby and responded in less than a minute after the initial shot was fired, a police official said. The shooting rampage began at 5:41 p.m. local time on the north side of the festival, Chief of Police Scot Smithee said at a press conference late Sunday. Smithee said the gunman gained access to the festival by cutting through a fence. He said some witnesses reported a second suspect, but police could not immediately confirm those reports. Still, the search is ongoing for the possible second suspect.

DML: Without all the details, gun control activists are on a rampage blaming Trump.  It never stops.

2-“Racism” overload
House Oversight Committee Chairman Elijah Cummings, D-Md., was the subject of President Trump’s wrath this weekend, as the president called the veteran congressman a bully and a racist and attacked his leadership of his district in Baltimore. On Saturday, Trump called Cummings a “brutal bully” over Twitter for how he spoke to border patrol officials. Trump said the congressman’s Baltimore district was in “FAR WORSE” shape than the situation at the southern border. That rebuke resulted in claims of racism from Democrats, including House Speaker Nancy Pelosi. Trump hit back, citing claims of racism against Pelosi from some progressive Democrats — a reference to Pelosi’s problems with the “Squad” (Reps. Alexandria Ocasio-Cortez, Ilhan Omar, Rashida Tlaib and Ayanna Pressley).

DML: I will focus heavily on this today at 10am during DML LIVE exclusively on TeamDML.com

3-Dan Coats to step down as director of national intelligence, Trump nominates staunch ally to replace him
Dan Coats will be stepping down as director of national intelligence next month, and President Trump has nominated Texas GOP Rep. John Ratcliffe, a strong White House ally, to replace him. Coats will be leaving his office Aug, 15. His departure follows months of speculation and public spats between the president and the intelligence community. Coats frequently appeared out of step with Trump during his two-year tenure, and their frayed relationship reflected broader divisions between the president and the government’s intelligence agencies.

DML: Not many people can keep in step with the president — lets face it, Trump jumps around a lot.

4-Gamer gets $3Million
Kyle Giersdorf, a 16-year-old from Pennsylvania, won $3 million after taking the top prize at the first Fortnite World Cup, at Arthur Ashe Stadium in Queens — venue for the U.S. Open. $30 million tournament.

DML: Fornite is a “shoot em up” video game. And we wonder why we have these mass shootings?

5-Study Finds CBD Might Have Antibiotic Properties
A new study shows CBD might have antibiotic properties. The research was presented at the annual meeting of the American Society for Microbiology. Researchers found that CBD has a similar effect on bacteria to that of common antibiotics. It reportedly even worked against strains of staph and strep bacteria that have become resistant to common antibiotics.
The company that helped fund the study plans to conduct a clinical trial in humans to test whether CBD can remove staph bacteria on the skin prior to surgeries to prevent post-surgical infection.

DML: The latest testimonial I received from a DML PURE user may be the best yet. “DML, I was able to pick up my granddaughter for the first time ever just a week after using DML PURE.  I love you. Thank you.”  How does that not bring a little tear to your eye?  DMLCbd.com for more information on how you can feel great again. 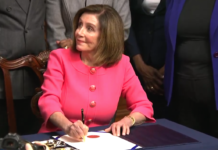