President Trump had earlier stated that he hoped the country could be re-opened by Easter, so the American people could get back to work and the economy could be re-started.

However, on Sunday, Trump said the virus is now expected to reach its “peak,” with the highest point of death rates in the United States, within two weeks.

DML said a source he spoke to at the White House said the truth is, the administration is petrified by the seriousness of this crisis and where it may be headed, and President Trump was just handed some really scary numbers today.

The deadly pandemic has skyrocketed in the United States, making it now the number one country in the world with the most cases of coronavirus, which is 142,047 as of Sunday evening, and 2,484 deaths.  Within the past 24 hours, over 18,000 new cases have been reported.

DML explained that he was so impressed with a product that has been known to help boost the immune system that he purchased the company months ago, and the testimonials have been pouring in from countless satisfied customers. He discussed this with his source at the White House on Sunday, and explains it in the video below. CLICK HERE for more details.

WATCH the important, eye-opening video below to hear DML’s full analysis. (Scroll down for details on how to join the growing TeamDML.com movement and get access to exclusive, daily news broadcasts and much more!)

IMPORTANT NOTICE: During this 2020 election year, social media outlets are SEVERELY suppressing the reach of all conservative news outlets, including DML News! That’s why you need to take two important steps TODAY! 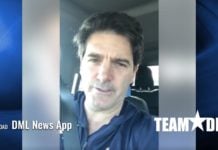