Dennis Michael Lynch (DML), founder of DML News App and TeamDML.com sounded off amid attacks on police officers in America.

“I can’t recognize my country anymore,” DML said. “I almost feel as if there is this tremendous dream that I can’t shake out of. Everything around me is so stupid!”

DML commented on the death of Rayshard Brooks, a 27-year-old Black man who was resisting arrest and shooting a taser at police when he was fatally shot by an Atlanta police officer outside a Wendy’s restaurant on Friday.

DML questioned what might have happened if the officer had let Brooks get away and Brooks had gone on to hurt someone else.  He went on to question why protesters attacked the Wendy’s restaurant involved, burning it down in the aftermath of the shooting death. Brooks had been asleep in the drive-thru lane when the police were called to check on the situation. Brooks was then found to be intoxicated.

DML said it was unwarranted and inexcusable to burn down a restaurant whose only crime was to be open for business.

“I have never in my life seen such stupidity,” DML said. “Why has America fallen so stupid?”

“Why are we allowing people to do this?” he asked. “Right now nobody’s doing anything. We’re writing reforms.”

He went on to comment on the upcoming Executive Order President Donald J. Trump is set to announce on police reform, as well as a controversial move by the New York Police Department to end an anti-crime unit.

DML explained why that is a very bad idea. WATCH: 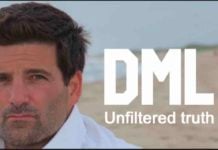