Today is March 7. Below are some of the stories grabbing headlines this morning. I hope you share this briefing as doing so will make you the smartest person in the room. And don’t forget to download the free DML App from the Google Play or Apple App Store to remain connected to me throughout the day.

“That gets a green light,” Blinken said in an interview with CBS News’ “Face the Nation.”

“In fact, we’re talking with our Polish friends right now about what we might be able to do to backfill their needs if in fact they choose to provide these fighter jets to the Ukrainians,” Blinken added.

.@SecBlinken: The U.S. has given the “green light” to NATO countries if they choose to provide fighter jets to Ukraine, one day after President Zelensky made a plea to members of Congress to provide them during a Saturday Zoom call. https://t.co/liDkdNCAFI pic.twitter.com/3vHqk6YzQe

DML: We are in massive trouble. Putin has the support of China and Iran, and he has no plans to stop with Ukraine.

2 – House working on bill to ban Russian oil imports
The Hill reports: House Speaker Nancy Pelosi (D-Calif.) said in a letter Sunday that the House is exploring legislative options to isolate Russia, including a ban on Russian oil and energy.

“Our bill would ban the import of Russian oil and energy products into the United States, repeal normal trade relations with Russia and Belarus, and take the first step to deny Russia access to the World Trade Organization,” Pelosi said in a letter to colleagues. “We would also empower the Executive branch to raise tariffs on Russian imports.”

The House speaker noted that the Biden administration had requested $10 billion for “humanitarian, military and economic support for Ukraine,” and said “Congress intends to enact this emergency funding this week as part of our omnibus government funding legislation.”

Pelosi’s letter comes after a bipartisan bill was introduced in the Senate earlier in the week to ban Russian oil imports. That measure was led by Sen. Joe Manchin (D-W.Va.), who chairs of the Senate Energy and Natural Resources Committee, and Sen. Lisa Murkowski (R-Alaska), a senior member of the committee.

New: Pelosi says that in addition to passing the $10B emergency Ukraine aid this week, the House is exploring legislation that would ban Russian oil imports, ax trade relations w/ Russia/Belarus, curtail Russia’s access to the WTO & authorize WH to hike tariffs on Russian imports pic.twitter.com/uxfY0zdGJK

Speaker Pelosi: “I’m all for that. Ban it. Ban the oil coming from Russia.” pic.twitter.com/Z5d4I6mpJ7

So why not ban it and expand U.S. energy production? pic.twitter.com/5GcTDydvnp

On sanctioning Russian oil and gas, Biden’s U.N. Ambassador Linda Thomas-Greenfield says Biden “is working with his advisers…on how to address these issues.”

Reminder: the Biden administration has said NOTHING about increasing our domestic energy production. pic.twitter.com/qWarbU5jiY

DML: Ban it IMMEDIATELY. Then get back to work on Keystone pipeline, and restart our own oil production!

3 – PUTIN’S PURGE: More than 13,000 Russians staring down serious prison time for opposing war
Fox News reports: Russian authorities have arrested over 13,000 anti-war protesters as its crackdown on dissidents within the country continues.

People across the country are protesting Russian President Vladimir Putin’s decision to invade Ukraine, beginning a war that has killed at least 331, according to the United Nations.

The arrests come after Putin has increased attempts to stifle any opposition to the government’s invasion of Ukraine, also blocking several major social media outlets within the country, such as Facebook and Twitter.

An elderly man in Russia tries to motivate protesters in front of police: “What kind of country will we have if we’re all cowards? Don’t be afraid! This is a heroic act!”pic.twitter.com/rdiSh5lqkN

WATCH: Russian police rush to arrest people as soon as they start shouting “no to war!” pic.twitter.com/eQClN8mSHO

Protesters in St. Petersburg, Russia form a long line and chant: “No to war!”pic.twitter.com/4GVr8h0fAQ

anti-war protests in Moscow today; people chanting “No To War!” newly passed legislation (signed into law on Saturday) makes it crime to call Russia’s invasion of Ukraine a “war”– or an “invasion” for that matter. (source: https://t.co/HyElpDZptg) pic.twitter.com/GFQ3GMcgZN

🔥🔥🔥video from inside a Russian police bus, with people who were detained at anti-war rally being driven to a precinct (can’t tell exactly where this is). they’re singing a classic, 20-year-old song by the rock group “Spleen” called “My Heart” (source: https://t.co/BSgn6brHZv) pic.twitter.com/piQnLXFOAn

DML: Obviously, Putin doesn’t even care about his own people, much less Ukraine or anyone else.

A March 2021 National Institute for Health and Care Excellence comprehensive review of nine studies failed to find evidence that hormonal therapy and puberty blockers were helpful. The review pointed out common flaws in transgender treatment research, such as confounding variables and bias resulting from observational studies that lack control groups.

Yet the media has widely publicized studies funded by pharmaceutical corporations and activist groups which claim to find that “gender-affirming” medical care, such as hormones that block children from going through puberty, is good for kids’ mental health.

Stanford University published a Jan. 12 study on childhood hormone therapy funded by the American Academy of Child & Adolescent Psychiatry (AACAP), which, according to a Stanford press release, is supported financially by pharmaceutical giants Arbor and Pfizer. Both companies produce hormonal medications used in gender transitions.

Every day, and especially today on International Transgender Day of Visibility, we support, stand in solidarity with, and celebrate our transgender colleagues, friends, and family. #TDOV #TransdayOfVisibility 🏳️‍⚧️ pic.twitter.com/j8g3rOnwKx

“The study, published Tuesday in the peer-reviewed @JAdolesHealth, is the first large-scale research regarding the mental health effects of hormone therapy for transgender and nonbinary youth”https://t.co/7BYt4g0Akf

5 – National Gas Price Average Reaches $4 per Gallon for First Time Since 2008
Breitbart reports: The national average price for a gallon of gas has skyrocketed to $4.00 – the highest national average in nearly 14 years.

The $4.00 national average is a 40 cent jump from last week and a 57 cent increase from just a month ago, AAA reports. On March 6 of last year, prices averaged $2.76 per gallon nationally. The national average is the highest it has been since July of 2008, CNBC reports. That month, gas price averages maxed out at 4.11 cents, which is the all-time record.

States on the West Coast and in the Northeast are seeing the highest prices in the country. On Sunday, AAA pinned California’s average gas price at $5.28 per gallon, while neighboring states, including Washington, Oregon, and Nevada, all had average prices of over $4.40 a gallon. Additionally, all northeast states – from Maryland and Delaware up through Maine – had averages exceeding $4.00 a gallon, according to AAA. 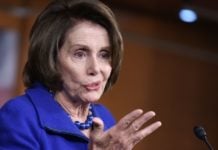