Today is November 22 and I am Dennis Michael Lynch. Below are my opinions on the stories grabbing headlines this morning. I hope you share this briefing as doing so will make you the smartest person in the room, in my opinion. And don’t forget to download the free DML App from the Google Play or Apple App Store to remain connected to me throughout the day.

1 – Christmas Parade Horror – Police confirm person of interest is in custody in deadly Wisconsin attack
Fox News reports: Authorities in a Milwaukee suburb continued overnight to deal with the aftermath after a red SUV plowed into Christmas parade marchers and spectators Sunday evening, striking more than 20 adults and children.

Chilling videos on social media showed the SUV plowing into parade participants, with loud screams audible from those who witnessed the horror. Other videos showed people running to the aid of the injured people.

Gunshots were heard in the area but authorities said they came from a police officer who was trying to stop the vehicle, the AP reported. No one was hurt by gunfire, authorities said.

In addition to taking one person into custody, authorities in Waukesha also recovered the vehicle linked to the parade tragedy, the AP reported.

Waukesha city officials early Monday confirmed that at least five people had died and more than 40 suffered injuries. They warned that both numbers could change.

BREAKING: First video of a red Ford Escape breaking through barriers after mowing down parade goers and firing rifle into crowd in Waukesha, WI pic.twitter.com/QHDi2fsKDz

Police in #Waukesha, Wisc. say there are fatalities in the Christmas parade car ramming incident but didn’t specify how many. A person is in custody. pic.twitter.com/jJEIuOJ9G6

You can hear screams in this video as people react to the vehicle driving through the Christmas parade in #Waukesha, Wisc. pic.twitter.com/ODUj34r4yv

DML: So many things to say about this – absolute outrage on all levels – Sickening!

James was instantly ejected after his left elbow and fist struck Stewart during a Pistons free throw in the third quarter of Sunday night’s game at at Little Caesars Arena in Detroit.

After the blow, both benches flooded onto the court as Stewart and James engaged in a shoving and screaming match.

A furious Stewart was seen with blood streaming down his face, screaming obscenities as coaches and teammates held him back, and was also ejected after repeatedly charging at James.

The Lakers won the game 121-116. In a post-game press conference, Lakers player Anthony Davis insisted that James had not intended to strike Stewart.

‘Stewart tried to defend LeBron, ‘Bron did the same thing. Everyone in the league knows ‘Bron not a dirty guy, he didn’t mean to hit him. As soon as he did, he looked back at him, told him “Oh, my bad, I didn’t try to do it,”‘ said Davis.

The Lakers and Pistons had to be separated multiple times after this play between LeBron and Isaiah Stewart. pic.twitter.com/im0o7fXeoI

This is why LeBron James was ejected. pic.twitter.com/48iDlZK6zf

LeBron was ejected after the Lakers-Pistons game got physical.

3 – BREAKING: Biden picks Jerome Powell to lead the Fed for a second term
CNBC reports: Jerome Powell, who guided the Federal Reserve and the nation’s economy through the staggering and sudden Covid-19 recession by implementing unprecedented monetary stimulus, has been nominated for a second term as chairman of the U.S. central bank.

President Joe Biden made the announcement Monday morning following weeks of speculation that a push from progressives might see Fed Governor Lael Brainard get the spot.

Brainard instead will be vice chair of the board of governors; she had been widely expected to get a separate vice chair for supervision post, which oversees the nation’s banking system. As vice chair, she would succeed Richard Clarida, whose term expires Jan. 31, 2022.

“As I’ve said before, we can’t just return to where we were before the pandemic, we need to build our economy back better, and I’m confident that Chair Powell and Dr. Brainard’s focus on keeping inflation low, prices stable, and delivering full employment will make our economy stronger than ever before,” Biden said in a statement.

The nominations next head to the Senate for confirmation.

Biden picks Jerome Powell to lead the Fed for a second term, as the U.S. recovers from Covid and battles inflation https://t.co/Rr7mN1If2g

DML: Biden is NOT “building back better.” He’s destroying our country!

Forty-four percent of current non-parents between ages 18 and 49 said they are unlikely to have children someday, marking an increase from 37 percent of respondents in 2018, according to the survey.

Just 26 percent of people in that group said they were “very likely” to have children someday, down from 32 percent in 2018, according to the poll.

Fifty-four percent of people who are already parents said that they were not likely at all to have more children. This figure is relatively similar to where it stood at 51 percent in 2018.

Among American parents younger than 50 who say they probably will not have more children, 63% say it’s because they just don’t want to. Among those who gave another reason, age, medical reasons, financial reasons and already having kids were most common. https://t.co/hjZnGiXCBv pic.twitter.com/tHCreLAJ3b

Some 44% of American non-parents ages 18 to 49 say it is not too or not at all likely that they will have children someday, an increase of 7 percentage points from the 37% who said the same in a 2018 survey. https://t.co/ZSYUR8bQ2z pic.twitter.com/UWp2gH3IJU

DML: Heartbreaking that our society has come to this.

The Fitchburg State University Center for Diversity & Inclusiveness announced the “processing” spaces in an email to campus community members, which also erroneously stated that Jacob Blake was killed.

“The Center for Diversity and Inclusiveness is creating space for our community to process the ’not guilty’ on all accounts verdict in the Kenosha, Wisconsin case where Kyle Rittenhouse, an Illinois native shot and killed two people protesting the wrongful death of Jacob Blake in 2020. Kyle was acquitted of all charges in the case after driving to Wisconsin with an automatic rifle,” the email read.

Fitchburg State University is offering a space to “process the not guilty verdict”
In their announcement, they divide the students of color and white students: pic.twitter.com/oKYa5KCozS

DML: The left has truly lost their minds. 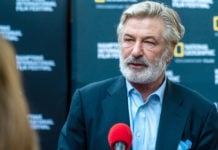