Three men have been charged in the fatal shooting of a Northern California sheriff’s deputy.

Deputy Brian Ishmael was killed responding to a theft report at an illegal marijuana growing operation in the rural Sierra Nevada foothills.

Vasqeuz are Morales are Mexican nationals.

Sheriff John D’Agostini said at a news conference Thursday that Ross called 911 to report the theft, but failed to relate that “he had a business arrangement with the persons growing marijuana on his property.”

D’Agostini said that after talking to Ross, Ishmael and his ridealong, an off-duty San Joaquin County deputy, went to the rear of the home to find a grow of about 75 plants. They announced their presence.

“At that time, they were immediately confronted with gunfire,” Sheriff D’Agostini said.

According to Blue Lives Matter, “The sheriff said that California law prevented him from contacting U.S. Immigration & Customs Enforcement (ICE) to inquire about the immigration statuses of both suspects, but that he had been told they were both ‘Mexican nationals’ who had resided in the United States for some time prior to the shooting.”

“There’s a lot of violence that surrounds these gardens and we’re seeing a perfect example of it right now,” the sheriff said.

Drugs, violence, and drug use continue to be a huge problem in America, and the situation is urgent at U.S. borders. As revealed in a jaw-dropping new documentary by DMLNews founder and documentary filmmaker Dennis Michael Lynch, used drug paraphernalia is one danger, previously unreported, that agents are facing at the border. 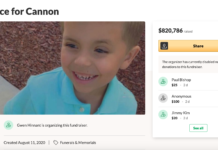