Powerful testimonies have been received by DML News from multiple people about the impact our documentaries on illegal immigration have had on young people.  Recently, a high school history teacher wrote to say that his students have watched the entire TRILOGY set, and are anxiously waiting for the release of DML’s next film.

Another supporter told us that her college-age son has watched the films, and shared them with his left-leaning friends, prompting them to view the issue of illegal immigration in a brand new light.

Over the past decade, Dennis Michael Lynch has produced three powerful documentary films about the costs and the impact of illegal immigration. In his films, DML takes you behind the scenes and provides facts, interviews and real solutions that are never presented by the mainstream media. Every person who has watched DML’s documentaries say these films opened their eyes to the TRUTH about the border in a way they’ve never seen before. These three films are timeless, and a MUST-SEE for anyone concerned about protecting the sovereignty of the United States.

Now they are all packaged into one complete DVD set!

Get your own copy of this powerful “They Come To America TRILOGY” today!

Every Trilogy order also includes a FREE “Build The Wall” bumper sticker! (ONLY a handful of these left – and once they’re gone, they’re GONE.)

The entire set of 3 DVDs is just $25. To order online now, just click the yellow ADD TO CART button below. You do not need a PAYPAL account to order. Just sign in as a guest. *If you have questions about your order, contact us at [email protected]

Every order will ALSO include an “I SUPPORT TRUMP” bumper sticker. 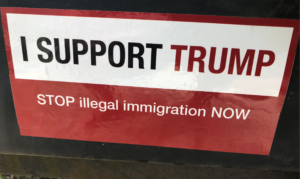