Today is May 14, I am DML, and these are the stories catching headlines this morning.

1- Judge pulls a questionable move in Flynn case
D.C. District Court Judge Emmet Sullivan issued an unusual order Wednesday appointing a law firm partner “to present arguments in opposition to the government’s motion to dismiss” the matter — and to consider whether the court should hold Flynn in contempt for perjury.

The partner, retired federal judge John Gleeson, has openly criticized the Trump administration’s handling of Michael Flynn’s case, raising concerns that he was selected to improperly bolster Sullivan’s efforts to keep the Flynn case alive even though both the government and defendant want it dismissed.

Sullivan has previously suggested Flynn may have committed treason, in a bizarre 2018 courtroom outburst, and seemingly confused key details about Flynn’s overseas lobbying work. The precise reasons for the perjury review were not clear in Sullivan’s order.

DML – There is so much dirty pool going on here, and nothing is ever done to stop it.

2- Burr’s cell phone seized
Federal agents on Wednesday served a search warrant to Sen. Richard Burr, R-N.C., at his Washington-area home in part of the government’s investigation into his stock sales that were made early in the coronavirus outbreak, according to a report.

The exclusive report by the Los Angeles Times, citing unnamed officials, said agents seized a cellphone. A second official said agents served an earlier warrant to obtain information from the senator’s iCloud account. A law enforcement source told the paper that the Justice Department was reviewing communication between Burr and his broker.

DML – There is so much dirty pool going on here, and nothing is ever done to stop it.  Maybe this time?

3-Immunolgy expert blows warning horn
America faces the “darkest winter in modern history” unless leaders act decisively to prevent a rebound of the coronavirus, says a government whistleblower who alleges he was ousted from his job after warning the Trump administration to prepare for the pandemic.

Immunologist Dr. Rick Bright makes his sobering prediction in testimony prepared for his appearance Thursday before the House Energy and Commerce Committee. Aspects of his complaint about early administration handling of the crisis are expected to be backed up by testimony from an executive of a company that manufactures, respirator masks.

“Our window of opportunity is closing,” Bright says in his prepared testimony posted on the House committee website. “If we fail to develop a national coordinated response, based in science, I fear the pandemic will get far worse and be prolonged, causing unprecedented illness and fatalities.”

DML: The death of America is propaganda and fear mongering.

4- AP reports Obama to play critical role in 2020
The Associated Press reported Thursday: “Nearly eight years after he was last on the ballot, Barack Obama is emerging as a central figure in the 2020 presidential election.

Democrats are eagerly embracing Obama as a political wingman for Joe Biden, who spent two terms by his side as vice president. Obama remains the party’s most popular figure, particularly with black voters and younger Democrats, and Biden’s presidential campaign is planning for him to have a highly visible role in the months to come.”

DML – I said months ago, this race is not about Trump v. Biden, it’s Trump v. Obama.  My money is on Trump.

5- WI stay at home order tossed out
The Wisconsin Supreme Court struck down Gov. Tony Evers’ coronavirus stay-at-home order Wednesday, ruling that his administration overstepped its authority when it extended it for another month without consulting legislators.

The 4-3 ruling essentially reopens the state, lifting caps on the size of gatherings, allowing people to travel as they please and allowing shuttered businesses to reopen, including bars and restaurants. The Tavern League of Wisconsin swiftly posted the news on its website, telling members, “You can OPEN IMMEDIATELY!”

The decision let stand language that had closed schools, however, and local governments can still impose their own health restrictions. In Dane County, home to the capital of Madison, officials quickly imposed a mandate incorporating most of the statewide order. City health officials in Milwaukee said a stay-at-home order they enacted in late March remains in effect.

DML – Open the country now!  With this in mind, it is critical that you have a strong immune system, and doctors say the immune system is weakened when it is not exposed to the outdoors.  You’ve been pent up inside for how long now?  Two month, three months? If you leave yourself vulnerable you could later regret it.  We are here to help you build your immune system with DML CBD, and there are two days remaining for our special deals.  We manufactured a ton of DML CBD products to help our customers, and we’ve been giving away for free as much as we’ve been selling.  But our bulk supply will run out in the next 48-hours, and when it does the free offers are gone for the foreseeable future.  Please, do not wait.  Go to DMLcbd.com/power and get started on the same routine I am on.  If you’re already a customer, jump on now to grab your next supply before the pricing for POWER near doubles.  Go now to DMLcbd.com/power to get a free bottle with the 3-pack. 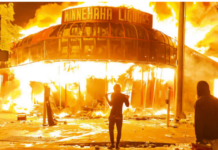