A Gallup Poll conducted between May 28 and June 4, a period that pre-dates President Trump’s Executive Order that suspended some employment-based visas, found that 34 percent of Americans, up from 27 percent a year ago, support increased immigration to the U.S. Gallup notes that it’s the highest support for expanding immigration since 1965 when Gallup began its polling.

Furthermore, Gallup’s poll showed that those who favored decreasing immigration fell to 28 percent, a new low. However, Gallup didn’t include total annual immigration statistics – more than 1 million lawful permanent residents settle each year – an important fact that could have had a bearing on responses.

Some of the poll’s takeaways were predictable: more Democrats and liberals than Republicans favor increased immigration. But the most surprising Gallup finding was that 77 percent of Americans “think immigration is a good thing for their country,” a result that conflicts with earlier polls including ones that Gallup conducted. One year ago, Gallup reported that 72 percent of Americans either wanted immigration kept at its current 1 million-plus level or reduced.

The Gallup and the Washington Post polls prove only that individual surveys don’t convey broad sentiment or represent a barometer for future outcomes. Look no further back into history than the 2016 national election when virtually every poll showed candidate Hillary Clinton trouncing now- President Donald Trump. Especially without merit are push polls, so called because the questions asked are designed to influence a certain voter block.

Consider this question that Gallup asked in its latest survey of a mere 1,040 U.S. residents: “On the whole, do you think immigration is a good or bad thing for the nation?” The question is not related to any specific subject, and so vague that it’s obvious that Gallup’s intention is to elicit a positive reply. “Good” has constructive connotations, while “bad” is synonymous with evil or wicked. Americans like “good” things and hate “evil” things.

In the more than 30 years that I’ve studied and written about immigration, thousands of polls have been taken. I’ve read most of them. But the most important question to measure Americans’ mood about immigration is rarely asked: Do you favor dramatic and unsustainable immigration-driven U.S. population growth?

When President Lyndon Johnson signed the Immigration and Nationality Act of 1965, he said: “It [the bill] does not affect the lives of millions. It will not restructure the shape of our daily lives.” But President Johnson was dead wrong. The overhauled immigration bill opened the door to tens of millions of new lawful immigrants. Many immigrants contribute to the U.S.’s fabric, but each of them needs housing, transportation, roads, schools and hospitals. Providing those essentials has created the massive sprawl that has undeniably diminished Americans’ quality of life.

Twenty-five years ago Bill Clinton said in the introduction to his Population and Consumption Task Force report that “…reducing current immigration levels is a necessary part of working toward sustainability in the U.S.” But two and a half decades later, about 25 million new immigrants have entered; all need basic those services that contribute to all that sprawl.

Preferring less immigration is not an indictment against immigrants. Instead, favoring lower immigration is a strong endorsement for population stability that will ensure an improved quality of life for all current U.S. residents, including immigrants who already live in America. 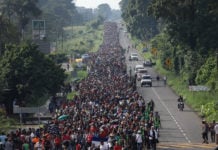