When journalists and lawmakers arrived at the U.S. Capitol on Wednesday, they were surprised to find hundreds of National Guard troops sleeping on the building’s marble floors.

Riot shields were stacked in orderly piles nearby and firearms rested against black backpacks. Half-empty water bottles sat at the troops’ feet, and some leaned against walls or next to statues of former presidents.

Those pictured in now-viral photos, however, represent just a fraction of the up to 15,000 active National Guard troops who will be deployed to Washington, D.C., ahead of next week’s inauguration of President-elect Joe Biden.

The report states there are currently about 2,000 National Guard troops at the Capitol building, with about 6,200 in D.C., all in full riot gear, armed and authorized to use lethal force if necessary. Thousands more are expected to arrive by Saturday.

See photos and videos below:

Hundreds of National Guard Troops sleeping on the floor of US Capitol – taking a break from working tirelessly to keep the grounds and those inside safe.

Many armed, riot shields laying nearby.

Others heading out into the cold morning air. @wsvn pic.twitter.com/tA6yzPjqeD

And more of them heading out of Capitol. Again… many armed. pic.twitter.com/5fKhbYvxxt

I’ve started a fundraiser to buy as many sleeping pads as I can today to deliver to the Capitol tonight for any Guard troops and police who are sleeping there this week. Please help by donating if you can, or by sharing this link! https://t.co/TlPAnwEqml

Inside the Capitol this morning where Speaker Pelosi usually walks to her office. pic.twitter.com/BQIEf5b2s4

Taking a photo with the statue of Rosa Parks in Statuary Hall. pic.twitter.com/wUcGRnPFLS

While some GOP House members complain about having to walk through metal detectors, National Guard troops spent night sleeping on marble floors of the Capitol. pic.twitter.com/7odvIkoBOQ

Just walked into the Capitol to find literally hundreds of troops napping and lining up in the Congressional Visitor Center— as streets around here are largely blocked.

Many are cuddling their firearms, fatigues over their heads to block light, and riot gear in neat piles. pic.twitter.com/vCHAOGMdfA

National Guard eating breakfast at the US Capitol this morning amidst heightened security measures pic.twitter.com/58tlnvuzp8

Armed members of the #NationalGuard rest in the U.S. Capitol after being deployed to Washington, DC following last week’s violent breach of the #CapitolBuilding 📷: Stefani Reynolds #USCapitol #Inauguration2021 pic.twitter.com/JzwClcW8ho

Recent update to the security presence is that they’re all armed now. (Unlike the first wave of national guard from DC and Virginia in the days following last Wednesday). pic.twitter.com/lccyMrDVA1 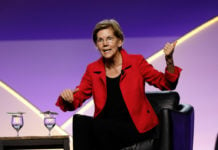