A Saudi defense attache is said to have traveled to Pensacola Monday to meet with officials at the naval base in the wake of a shooting there that left three dead.

Saudi national Mohammed Alshamrani opened fire in a classroom building at the naval base in Florida last Friday, killing three people and injuring eight. He was also killed.

Now investigators are facing mounting pressure to discover his motives in the attack amid fears the US will not confront the oil rich kingdom over the incident.

NBC reported, ” Mohammed Alshamrani, the shooter at the Naval Air Station in Pensacola, obtained his Florida hunting license on July 11th of this year, a spokesperson says. That allowed him to legally purchase the firearm he used last Friday.”

NBC News: Mohammed Alshamrani, the shooter at the Naval Air Station in Pensacola, obtained his Florida hunting license on July 11th of this year, a spokesperson says.

That allowed him to legally purchase the firearm he used last Friday.

DMLNewsApp founder Dennis Michael Lynch, who experienced the 9/11 terror attack first-hand, has blasted the naval base shooting attack both on Twitter and in multiple Facebook Live broadcasts, saying this indeed was a terror attack committed by Saudi Arabia on U.S. soil. He has called for the U.S. military to immediately STOP training foreign military on U.S. soil.  DML tweeted, “[S]hut the door on Saudi Arabia, wtf are we doing training terrorists how to fly planes!!!

“Please tell ‘the king he can keep his condolences,” DML tweeted in response. “They’re as useless as the last set of condolences he sent after 9/11. The Saudi people hate us, and they play politicians like a grand piano to suck us taxpayers dry while laughing along the way.”

15 of the 19 terrorists involved in the 9/11 terror attack were Saudis, and some of those attended flight school in Florida. DML shared a little-known fact – six months after the 9/11 attack, TWO of the Saudi terrorists who flew planes into the twin towers were actually APPROVED for flight training in Florida, having applied before they carried out the attacks.

In the following video clip, Lynch, who has been sounding the alarm about terrorist activity at the border and beyond,  spoke to U.S. Border Patrol Agent Chris Harris (now retired). He shared chilling details of people hiding within large groups, including a story about a man from Saudi Arabia. See his account in the video below, taken from Lynch’s latest immigration film, “They Come to America IV – The Cost of Politics.” VIDEO: Hillary Clinton makes admission about desire to run against Trump in 2020 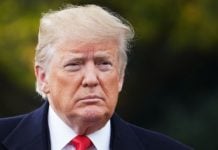