Democratic 2020 presidential candidate Andrew Yang’s debate preparation Wednesday in Houston apparently included some solo basketball – and an extra-lowered bucket- for the cameras at ABC, but it’s not likely to include any one-on-one with Texas Senator Ted Cruz …

At least until his poll numbers go up.

“Sorry. You gotta poll at 5% or more to play on my court,” Cruz tweeted, referring to Yang’s low national polling numbers.

Sorry. You gotta poll at 5% or more to play on my court. https://t.co/xRx6VYdWft

2020 presidential candidate Andrew Yang loosens up for the #DemDebate by shooting some hoops on a Houston court—and tells @ABC News how he’s preparing for tomorrow night. https://t.co/98ezhDHrTB pic.twitter.com/h4LoEv6BNt

When I see an eight-foot rim I know exactly what to do. 😀 pic.twitter.com/IFVB4EIiRH 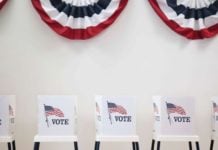