The Will Smith movie Emancipation, which is backed by Apple Studios, won’t film in Georgia as originally planned in protest of the state’s recently passed voter integrity law, making it the first major Hollywood production to boycott Georgia over the new legislation.

Will Smith and director Antoine Fuqua confirmed the decision in a joint statement to Deadline, which first broke the story Monday. They said they could not “in good conscience provide economic support” to the state.

“At this moment in time, the Nation is coming to terms with its history and is attempting to eliminate vestiges of institutional racism to achieve true racial justice. We cannot in good conscience provide economic support to a government that enacts regressive voting laws that are designed to restrict voter access,” they said.

They continued, “The new Georgia voting laws are reminiscent of voting impediments that were passed at the end of Reconstruction to prevent many Americans from voting. Regrettably, we feel compelled to move our film production work from Georgia to another state.”

Antoine Fuqua and Will Smith will move production on their big-budget, runaway slave thriller “Emancipation” out of Georgia in protest over the state’s controversial new voting restrictions. https://t.co/n85hl0lXXf

Will Smith pulls movie production of “Emancipation” from Georgia: “We cannot in good conscience provide economic support to a government that enacts regressive voting laws that are designed to restrict voter access” https://t.co/8owqqvt08y WATCH: Former Trump official rips into AOC, declares she ‘has no horse sense’ 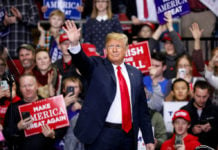