The Taliban have stepped up attacks across Afghanistan after President Trump scrapped high-level peace talks between Afghan and Taliban leaders at Camp David earlier this month.

This week alone, three major suicide attacks killed dozens of people, including 26 at a campaign rally for Afghan President Ashraf Ghani. The Taliban claimed responsibility for all the attacks.

In all, 17 U.S. troops have been killed and more than 100 wounded, some of them severely.  One of them — a special operations soldier — lost his right arm and leg last month after a grenade exploded during close-quarters combat.

Fox News reported that one severely wounded special operations soldier lost his right arm and leg last month after a grenade exploded during close-quarters combat. A military plane was sent from Germany to Afghanistan to retrieve the wounded soldier, then made an 8,000-mile non-stop flight to Texas to the Brooke Army Medical Center.

The report said, “Three military aircraft, 18 medical personnel, 24,000 gallons of fuel and 26 gallons of blood were spent to save the life of this critically wounded soldier.” The soldier is not being identified, at the request of the military.

Additional details are provided in the video below: 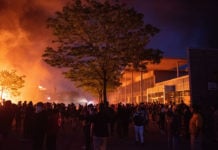