The ‘Fox & Friends Weekend’ co-host described the violence he witnessed on the ground, and said he saw attacks by protesters.

Hegseth said it was a good thing the National Guard was called up.
“I can’t help but think where Washington D.C> would be right now [otherwise],” he said.
“Thank God, for the men and women who wear the uniform of the Metro P.D., of the federal agencies that were there, and then of the D.C. National Guard, for what they stood up for,” Hegseth said.
He said law enforcement “stood the line” despite “vile things” being said to them.
“It was an honor to stand with them, ” Hegseth said.

Hegseth, who serves as Chief Executive Officer for Concerned Veterans for America, was an infantry Captain in the Army National Guard. He was deployed to Afghanistan, returning to the US in 2012 to serve as the senior counterinsurgency instructor at the Counterinsurgency Training Center in Kabul. He previously served in Iraq with the 3rd Brigade of the 101st Airborne Division for their 2005-2006 deployment, serving as an infantry Platoon Leader in Baghdad in 2005, and as a Civil-Military Operations officer in Samarra in 2006. He also served in Guantanamo Bay for a year with his National Guard unit.

Pete has two Bronze Stars and a Combat Infantryman’s Badge for his time in Iraq and Afghanistan. 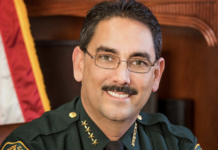