Waukesha parade horror suspect Darrell Brooks Jr., a career criminal who is now an alleged killer, was also an aspiring rapper who posted songs and music videos to his social media under multiple pseudonyms, including “MathBoi Fly.”

Brooks is accused of plowing into Waukesha’s Christmas parade Sunday evening, killing at least six people and injuring dozens. He faces life in prison if convicted and had been let out on bail earlier this month despite a long, violent past that included multiple felony convictions for violence, drugs and statutory rape.

His music is as belligerent as his past.

“This that f— Donald Trump flow and whoever hate it,” Brooks raps in his song titled “X.”

“Now let me talk about that b***ch we call the president,” the rap song continues, referencing Trump. “A closet racist and he plays his part so effortless. From real estate to television had us all convinced. And now we’re worried about the future, what to tell our kids.” 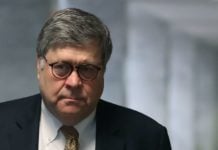