The unwitting host of the suspect in the deadly Christmas parade rampage in Wisconsin said the ex-con nonchalantly asked him if there was “something going on downtown” — moments after he allegedly plowed through the crowd.

Daniel Rider told CBS News that he was sitting in his living room watching the Dallas Cowboys play the Kansas City Chiefs on Sunday when Darrell Brooks knocked on his door and asked for help.

Brooks appeared to be shivering, so the homeowner invited him inside, lent him his jacket and even made him a sandwich as the stranger borrowed his phone to call his mother and waited for an Uber.

Rider said he missed hearing the alerts coming in on his phone, because he had allowed Brooks to use the phone.

“I had no idea anything was happening,” Rider said. “He is telling me that, ‘Oh, is there something going on downtown?’ I was like, ‘There’s a parade today.’ And he was like, ‘Oh, that’s probably the parade.’

Rider said Brooks was “polite” to him,  but explained, “So he was just completely putting on a face and lying about everything.”

In fact, Brooks had just killed five people and injured dozens more, as he plowed right through the parade, zigzagging as he drove in what police have described as an intentional act.

WATCH the news report below, which includes the interview with Rider:

The man suspected of driving an SUV into a holiday parade in Waukesha, Wis. arrived at a nearby house shortly after the fatal incident.

A doorbell camera captured a resident inviting the suspect, who claimed he was homeless, into his home, unaware of the event. pic.twitter.com/mEHfYpjlta

Below is the Ring doorbell camera footage as Brooks showed up on Rider’s front porch. Police are seen arriving and arresting Brooks. 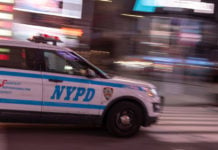 VIDEO: Students from 18 schools walk out of class to demand virtual learning