While speaking at a campaign rally in Ohio Monday evening, President Trump recognized two high school football players who were briefly suspended from their team because they dared to carry flags honoring first responders out onto the field before a game, on the anniversary of the 9/11 terror attack.

The president first praised the two teens for their actions, then, after spotting them in the crowd, he invited them to come up on stage with him.

WATCH the moment below:

The players were also awarded scholarships for their actions, according to the following report:

MORROW, Ohio (WKRC) — A local group called Holiday for Heroes is awarding scholarships to the two Little Miami teens who were briefly suspended from the high school football team for carrying two flags onto the field when the district said they were told not to.

The organization did not say how much the scholarships are worth. 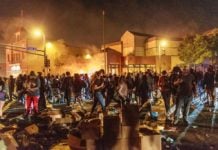